The specimen-type in the collections of the Museum 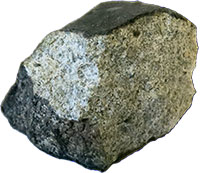 On 5 September 2020, the Nomenclature Committee of the Meteoritical Society formally approved the name and classification of the meteorite, found in Emilia Romagna in January of this year, proposed by researchers from the Department of Earth Sciences and the Museum of Natural History - Museum System of the University of Florence. The official name is ‘Cavezzo’, from the name of the place where the fragments of the celestial body were found.

‘Cavezzo’ is the 42nd meteorite officially found in Italy and the 32nd among those seen falling and collected.

“The analyzes highlighted a marked difference in the mineralogical composition and in the petrographic texture of the two fragments found,” explains the curator of the Lito-Mineralogical collection of the Natural History Museum, Vanni Moggi Cecchi, who carried out part of the analyzes.

The study of the found fragments, coordinated by Giovanni Pratesi, is still ongoing at the laboratories of the University of Florence and other European laboratories, including those of the Open University and the Polytechnic of Zurich, and will provide new and important information on the formation and evolution of the solar system.