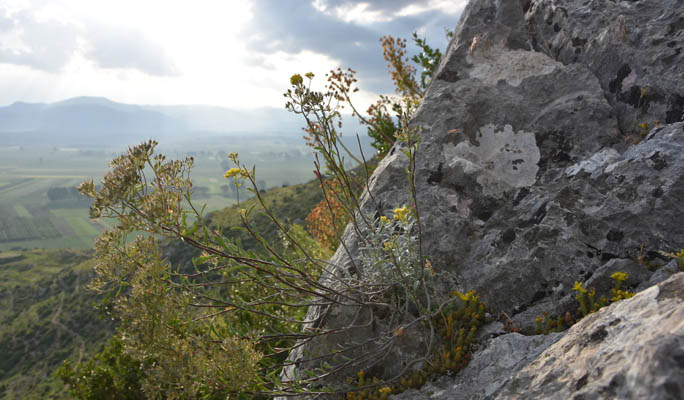 The alyssi corimbosi (genus Odontarrhena) are relatively common grasses in the arid and rocky environments between the Mediterranean basin and central Asia, which would go rahter unnoticed to the non-specialist if not for the extensive patches of an intense yellow colouring the meadows during their late spring bloom.

Special Plants
But there is a feature of these plants that makes them the object of special attention by botanists and ecologists: most of the known species - over 50 - grow almost exclusively on soils rich in heavy metals, and they are able to extract from these soils large quantities of nickel to hyper-accumulate it in the leaves and to deter parasites and bugs from feeding from them.

It might seem little more than a curious defensive adaptation, if it weren't that the world has been studying for years how to exploit it for the natural reclamation of nickel-polluted sites (the "phytoremedy") and even more so for the phytoextraction, a futuristic and ultra-sustainable biotechnology in which it is important to make plants do the work that at other times was the prerogative of miners, since nickel has several applications in the industrial sector.

The project
To better understand the mechanisms and potential of these wonderful creatures, the European Community financed the AGRONICKEL project, an international initiative involving universities in different European countries, on funds from ERANET JPI FACCE SURPLUS 2015. The University of Florence could not help but being involved, since it is exactly in Florence that 70 years ago the first hyper-accumulating nickel species in the world was discovered, just an exclusive alyssum (endemic) of the serpentine rocks of Tuscany and eastern Liguria.

The project aims, among other things, to investigate aspects that are still unclear in the diversity of Odontarrhena in Albania, a country rich in metallurgical soils and therefore very appreciated by these plants. With this goal in mind, researchers from the University and the Museum have made extensive sampling on all the major serpentine outcrops of Albania during three missions carried out between 2016 and 2017. Furthermore, on the trail of the famous German botanist Friedrich Markgraf (1897-1987), whose findings were destroyed in Berlin during the WWII, have rediscovered many, whose memory had been lost.