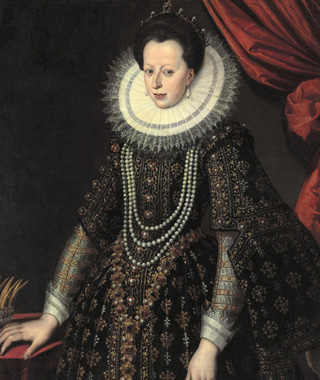 "La Quiete" of the Villa

Christina of Lorraine (Bar-le-Duc, 16 August 1565–Florence, 19 December 1637) bought the villa in 1627 to make it into a place of retreat. As Grand Duchess of Tuscany – at the premature death of her son Cosimo II, in 1621 she took up regency together with her daughter-in-law Maria Magdalena of Austria – Christina sought here rest and quiet.

The quiet had to hover also in the furnishings, so the Grand Duchess commissioned to Giovanni da San Giovanni the fresco that today gives the name to the Villa, "La Quiete che pacifica i venti" (1632).

To make the occupations of her public life exacting, however, there were other matters besides politics. Very close to the ecclesiastical environment - it was she who built the corridor of Boldrone that connected the villa to the church of the nearby monastery - and at the same time attracted by scientific knowledge, Christina found herself involved in the clash between the rigorous Counter-Reformation theological thought and the new scientific visions that subverted the construction of knowledge.

Christina di Lorraine was, as a matter of fact, the recipient of the most important of the four Copernican Letters written by Galileo Galilei to argue that the Copernican heliocentric system did not conflict with sacred Scripture. Galileo tried to get the Grand Duchess's favor to protect him in the Roman debates, presaging the condemnation of the Holy Office which soon had actually happened.

Retired to private life, Christina took refuge in the quiet of the villa where she remained until the end of her days. Although in her will, Christina had expressed the will that the villa remained in use of her princess nieces, at her death it was inherited by the Grand Duke Ferdinando II and was assigned to Christina's 7th son, Lorenzo de' Medici, who resided in the nearby Villa Petraia. Villa la Quiete thus became the home of his "Master of the Chamber", the baron Alessandro Del Nero.