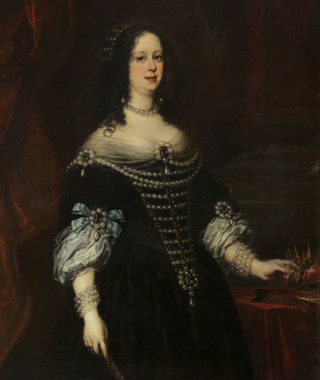 The "candor" and the Quiet

"Dos in candore", my dowry consists of candor. This was the motto of Vittoria Della Rovere, the fifth Grand Duchess of Tuscany, who, of spiritual purity as a form of elevation of the soul practiced through abstinence from earthly pleasures, made the purpose of her life. Vittoria fully expressed the culture of "purity" that took over Tuscany between the 16th and 17th centuries.

Vittoria was certainly a daughter of her time in representing the culture of "candor", but the bigoted and clerical-like education imposed on her by her grandmother Christina of Lorraine and her aunt Maria Magdalena, had probably made a strong contribution. Claudia de' Medici, in fact, immediately after the death of her husband Ubaldo Della Rovere, had entrusted their not-yet-1-year-old daughter Vittoria to Christina and Maria Magdalena who were at the time regents of the grand-ducal throne and tutors of Ferdinand II. In 1634 Vittoria married his cousin Ferdinand, thanks to an engagement guaranteed by Christina and Maria Magdalena. The marriage was not a happy one. It seems that after the birth of Cosimo III in 1642, there was a period of real separation that would explain the birth of the second son, Francesco Maria, only in 1660. A strong conflict was triggered by the divergence of visions on the education of their first child: the mother wanted him to be educated with religious precepts, the father with teachings of a secular, modern, scientific nature. The will of Victoria was preponderant and Cosimo grew according to strict Catholic principles.

The villa and the years of Vittoria

Having become a widow in 1670, Vittoria dedicated her energies to the protection of the "Servants" and started a season of great transformation at Villa La Quiete. Under her patronage (granted from 1680), the villa was renovated and enlarged and the church was built, allowing the "Servants" to attend the sacred services without having to go to the Boldrone monastery.
With her presence, the heritage of the Villa was also embellished. In fact, Vittoria's protection caused other noble families to send their daughters to the boarding school of the "Servants"; it was during this period that the most significant donations of furnishings, vestments and liturgical objects began to arrive.
Vittoria's years had been so important for the Villa that four years after her death, in 1694, the "Servants" commissioned to Giovan Battista Foggini her funeral memory that can be seen on the wall of the church's nave itself.